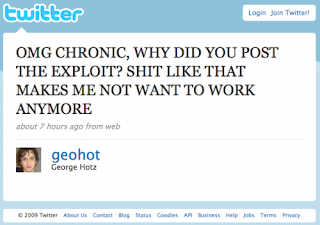 The posting of the usb_control_msg(0x21, 2) Exploit by Chronic Dev to the iPhoneWiki caused a little bit of upset today with GeoHot threatening to stop work on the exploit."OMG CHRONIC, WHY DID YOU POST THE EXPLOIT? SHIT LIKE THAT MAKES ME NOT WANT TO WORK ANYMORE""i discovered that exploit first, and that was really a low blow to try and take credit. have fun with greenpois0n, i am not releasing"Chronic Dev has since posted the full story on his blog to explain things.We wanted to make this perfect and bug-free, so it was taking awhile. Soon, people started commenting and emailing me complaints about it taking so long. I can handle this. Then, I start getting ppl threatening to file a dispute with PayPal to get a refund. This is an issue, not because they don’t realize that these were donations, but because PayPal usually sides with the “buyer”, as I have heard in many PayPal horror stories.When GeoHot announced he would have a jailbreak in two days this sent angry donators into overdrive.Some people started saying that I was an all out scammer and when geohot released first they would dispute their donation because it “seemed like it was all an elaborate hoax to get a free iPod touch”.Chronic decided to publish the exploit on the wiki for numerous reasons:- We knew that we could not get greenpois0n completely finished in time. We needed a perfectly safe NAND write, a ported over 24kPwn, and more to make it totally stable.- Geohot would release in a few days anyway, so “hiding the exploit from Apple” was not a concern at all.- We had done a lot of research on the exploit, how it worked, and why it worked, and had everything written up. If Geohot would release in a few days, and we knew we couldn’t do anything, why not share what we already knew with the community? Geohot usually writes up short descriptions and gradually adds on when it comes to exploits, while we already had a nice write-up already made.- Again, Geohot said a few days, so the idea that we were giving anything to Apple is false, since they would have had it in “a few days” anyway.- This would cause people to stop hounding about progress + threats to dispute their donation, because it would show that their money went to good use.GeoHot has since posted that he understands Chronic Dev's reasons and that the two parties discovered the exploit independantly. "oh i understand your reason...people were reversing their donations. why you shouldn't ask for donations before release""i want to apologize, chronic didn't steal the exploit, and i phrased http://bit.ly/1YkFH9 badly. independently discovered"Those just looking for a jailbreak can rest assure that it is being worked on and still has an ETA of 2 days."eh, you're right, I shouldn't take it out on the end user. sorry, i'm pissed off in the morning. k fine, back to work. #2days"Those threatening to withdraw their donations to Chronic Dev should be grateful for the team's hard work and continued contribution to the community. GeoHot has amazing talents that not many can match. His ability to release a jailbreak earlier does not reduce the importance of donating; especially when donations are used to purchase devices needed for testing and development.